The Kurilian Bobtail cat is a Russian cat breed known for its wild appearance and short pom-pom tail. The tail has two to 10 vertebrae and may be anywhere from about one-half inch to about 5 inches long. The tail kinks or curves in a variety of directions lending different looks to the tail, which are described by the breed standard as “snag”, “spiral” or “whisk.” Like fingerprints or snowflakes, no two Kurilian Bobtail tails are alike.

A compact and hefty cat, the medium to large-sized Kurilian Bobtail has a solid build and substantial boning. The Kurilian Bobtail is what is known as a natural breed, meaning it initially developed on its own without human intervention. It comes in a variety of traditional solid or tabby colors, with or without white markings.

Coat: Short or semi-long; silky and flat with moderate undercoat

Coat Color: A variety of traditional colors in solid or tabby, with or without white

Eye Color: Any color, including blue or odd-eyed

Characteristics of the Kurilian Bobtail

History of the Kurilian Bobtail

The Kurilian Bobtail hails from the Russian Kamchatka peninsula and Russia’s islands of Sakhalin and Kuril. Though no one knows for sure exactly how old the breed is, the Kurilian Bobtail developed naturally on the islands at least 200 years ago. The unique cat with a distinctive tail caught the eye of visiting explorers (possibly scientists or military personnel), and they brought some of the cats back with them to central Russia in the mid-1900s. Russians appreciated their fine hunting skills and put them to work dispatching rodents. The breed spread to Europe, but is largely unknown in North America.

The Kurilian Bobtail is recognized by the International Cat Association. In 2012, the breed was granted championship status by TICA, which allows cats to compete in cat shows for titles.

The Kurilian Bobtail comes in two coat varieties: short and long (which is described as semi-longhaired by the breed standard). In both coat types, the soft, silky hair lies flat and has a moderate undercoat. In the shorthaired variety, the tail coat is the same length as the hair on the body. Semi-longhaired Kurilians have a full and plumed tail. The Kurilian Bobtail’s silky coat resists matting so it is easy to care for, requiring weekly brushing with soft slicker brush to remove loose hair. The occasional bath will keep the coat feeling clean and soft. Shedding is low to moderate; brush more frequently to keep shedding to a minimum. Trim your Kurilian Bobtail’s nails every two weeks and check inside the ears weekly. If you see any redness or notice any odor, or if your cat is shaking its head or scratching at the ears, schedule an appointment with your veterinarian. If the ears appear dirty, clean with a pet ear cleaner using a cotton ball and or gauze (never use a cotton swab to clean a cat’s ear).&nbsp;

Kurilian Bobtails are highly intelligent and love learning new things. You might be surprised to learn that Kurilian Bobtails can easily be taught tricks. It’s also simple to teach your Kurilian Bobtail the house rules, though your cat may or may not choose to follow them. In general, the breed is easy to live with and fun to be around.

Kurilian Bobtails are naturally quite active, but you can help your cat get enough exercise and indoor enrichment by providing places to climb and perch like cat trees and kitty condos, and engaging your cat in fun play by teasing with feather wands, tossing toy mice and playing with interactive toys. To allow your cat to enjoy scratching, which is a natural behavior, provide a variety of acceptable scratching surfaces. Some cats like to scratch vertically (as with scratching posts or cat trees) and other prefer to scratch horizontally (as with cardboard or sisal scratchers that lie on the ground).

Although some pedigreed cat breeds are prone to developing certain genetically-linked diseases, the Kurilian Bobtail is extremely healthy and currently has no known health concerns. Responsible breeders choose their breeding stock carefully and avoid breeding cats with any health issues. Many reputable breeders also offer a health guarantee of some kind.

Obesity is a concern among cats in general. Cats should not be overfed or allowed to become overweight. Keeping your Kurilian Bobtail at an ideal weight can reduce the incidence of certain health issues like diabetes, heart disease, and arthritis. Feed your Kurilian Bobtail measured amounts of food at regular meal times (twice a day for adult cats). Free-feeding (leaving food out all day), leads to mindless snacking, which can contribute to an overweight cat. Ask your breeder or veterinarian to recommend a healthy food for your Kurilian Bobtail cat.

10 of the Best Russian Cat Breeds 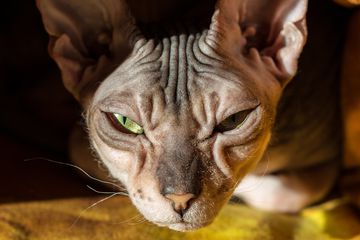 Where to Adopt or Buy a Kurilian Bobtail

If you’re thinking about buying a Kurilian Bobtail kitten, consider visiting a local cat show, where you can see many different cat breeds and connect with reputable breeders. To find a cat show in your area, do an internet search for “cat show near me.” Reach out to breeders even if you’re hoping to rescue. Because the breed is so rare, it’s unlikely that you might find a Kurilian Bobtail at your local animal shelter. The International Cat Association maintains a list of active breeders on its website.