As its name suggests, the Havana Brown cat is a brown-hued cat, but despite the name, the breed does not trace its origins to Havana. Instead, the Havana Brown was created in England in the 1950s. So how did this breed come to be named for the lively Cuban city? No one knows for sure, but some theories include that the breed name was inspired by the Havana rabbit or that it was christened Havana Brown in reference to the rich brown color of its coat, reminiscent of the color of Havana tobacco.

Havana Brown cats are friendly, affectionate, and playful little cats. Hardly aloof or independent, Havana Brown cats want to be close to their people as much as possible. They even use their paws like hands to reach out and beg for attention, and they need plenty of it. Havana Brown cats are also quite social with others of their species and happy to cuddle with all family members, whether human or feline.

Coat Color: Rich and even shade of warm brown; color tends toward red-brown (mahogany) rather than black-brown

Eye Color: Any vivid and level shade of green

Characteristics of the Havana Brown Cat

History of the Havana Brown Cat

To learn how the Havana Brown cat came to be, first we must travel back to the late 19th century England. During this time, solid-brown cats (called self-brown cats) were being exhibited at British cat shows under various names, one of which was “Swiss Mountain Cat.” These brown cats looked a lot like Siamese but rather than blue eyes, they had green eyes.

As the story goes, the Siamese Cat Club of Britain issued an edict in 1920 stating that Siamese may only have blue eyes—not green. As a result, the solid-brown cats slowly disappeared. Fast forward to the 1950s and some English cat breeders decided they would like to recreate that lost brown cat from the past. The group began researching color genetics and performing breeding experiments until they identified how to produce a self-brown cat.

These breeders found success when a self-brown male kitten, named Praha Gypka, was born via a breeding between a solid black shorthair cat and a chocolate point Siamese. Around the same time, an accidental breeding took place between a solid black shorthair cat and a seal point Siamese. That breeding resulted in another brown male kitten, Elmtower Bronze Idol. The first cat to be registered in England as a Havana Brown, Elmtower Bronze Idol today is considered the forerunner of the Havana Brown breed.

Eventually, after the breed was recognized by English cat registries, the breed name was changed to “Chestnut Brown” cats or “Chestnut Brown Oriental” cats. The body type of these cats looked much like today’s Oriental. Outside of the U.S., the breed today is known simply known as the Havana, and is essentially a chestnut Oriental cat.

Meanwhile, around the same time in the United States (1950s and 1960s), some U.S. cat breeders were focusing on the Havana Brown as well. Then as now, in the United States, the medium-sized Havana Brown is muscular but with a more moderate body type. The head is slightly longer than wide, with round-tipped ears, and a somewhat rounded and prominent muzzle. The coat is a rich, warm mahogany solid brown color with brown nose leather and paw pads (even the whiskers are brown). The medium-sized oval eyes are set wide apart and are brilliantly colored in any vivid and level shade of green.

The Havana Brown’s short, smooth coat requires minimal grooming. Brush once a week with a soft slicker or rubber curry brush to remove the loose hair. To give the coat a brilliant shine, polish it with chamois cloth after brushing. Bathe occasionally to keep the skin and coat looking and feeling its best. Show cats should be bathed a few days prior to showing. Keep your Havana Brown cat’s nails trimmed short and check inside the ears weekly. If you see any dirt in the ears, use a pet ear cleanser to clean the ears using a cotton ball (never stick anything like a cotton swab into a cat’s ear). If the ears look red, inflamed or excessively dirty, or if you see your Havana Brown shaking her head or scratching at her ears, call for an appointment with your veterinarian.

Although any cat can develop a health issue during its life, some pedigreed cat breeds are more prone to certain congenital health conditions. However, the Havana Brown has no known specific conditions. Even so, it’s a good idea to buy a kitten from a breeder who offers a health guarantee of some kind.

Havana Browns like to eat. Take care to ensure your Havana Brown doesn’t eat too much and gain too much weight. Keeping your Havana Brown lean may help to prevent certain weight-related health issues like diabetes, heart disease, and arthritis. Feed measured amounts of a healthy cat food at regular times (twice a day for adult cats). Free feeding (leaving food out all day) can lead to snacking and contribute to obesity. If you’re not sure what to feed your Havana Brown, talk to your veterinarian or breeder for advice.

10 Cat Breeds That Are Rare to Find 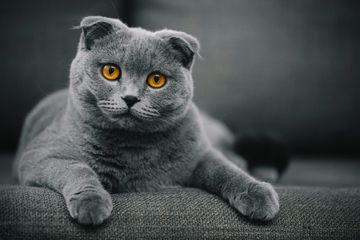 Where to Adopt or Buy a Havana Brown Cat

The Havana Brown is an extremely rare cat breed. If you long for a Havana Brown kitten, it may be difficult to find. Your best bet is attending a local cat show, where you can meet reputable breeders. Cat shows are fun to watch and you can view many different cat breeds all together. To find a cat show in your area, do an internet search for “cat show near me” or visit http://www.catshows.us. If you like rescuing, you are unlikely to find a Havana Brown in an animal shelter, however, some might end up in need rescue, usually through Havana Brown breeders.

10 Cat Breeds That Are the Most Affectionate