Cats are one of the most popular pets yet they are often misunderstood. This is, in part, due to the many myths and stereotypes that are commonly shared about cats. It’s time to separate fact from fiction by dispelling four common myths about cats.

There is a common misconception that cats cannot be trained, or that training them is more difficult than with dogs. Both of those statements are false and can be detrimental when a cat owner believes them. When owners feel that their cats cannot be trained, they also believe that cats’ behavioral problems cannot be resolved. This can often result in fatal consequences for cats, including euthanasia and relinquishment.

The truth is that many feline behavior problems can be resolved, and they are easy to train. Cats can be taught foundation behaviors (targeting, attention), positive husbandry behaviors (nail trims, brushing, and handling), and fun tricks (roll over, high five).

When training cats, focus on the good, meaning, focus on the positive behaviors and build upon those instead of telling an animal what not to do. Positive training methods accelerate learning since animals can better understand what we are asking of them instead of repeatedly telling them no. These methods also help to not only keep training fun for both the teacher and the learner but also creates enthusiastic learners and encourages creativity along with strengthening the human animal bond.

Using aversives, meaning something the cat doesn’t like (i.e. spraying with water, shocking, yelling, hitting), to stop the behavior is not recommended. Using aversives does not teach the cat the wanted behavior (the cat learns to wait until you are not around before engaging in the behavior), does not effectively communicate with your cat what you do want, can increase fear and anxiety, and can cause the cat to be fearful of you and damage the human-animal bond.

10 Weird Things Your Cat Does and Why 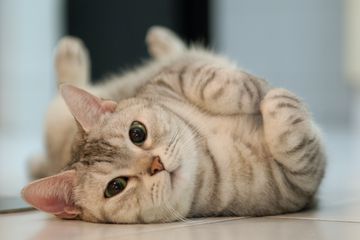 Myth: When Your Cat Shows You Their Belly, They Always Want You to Pet Their Belly

Many people see this and take it as an invitation to rub their cat’s belly, but in most cases, that is not what the cat is communicating to you when she exposes her abdomen.

Cats sometimes roll on their back to show a defensive posture. When a cat feels that she cannot get away, she will roll on her back to better use her claws and teeth against a predator. A cat’s abdomen is a very vulnerable area because it holds many vital organs. Do not take it personally if your cat scratches or bites you when you rub her belly.

A cat laying on her back exposing her abdomen in a familiar setting like her home, can also often communicate that she is relaxed and feels safe in her environment. The cat feels so comfortable that she will lie on her back and expose their vital organs instead of watching for predators.

Additionally, cats can lie on their backs when they want to play. This is the time to take out the feather wand or their favorite catnip kicker. Avoid using your hands and feet to play with your cat because we want to teach her appropriate play and that your hands and feet are never toys to attack.

The best approach when you see your cat showing her abdomen is to keep your hands clear. If you do pet your cat while her abdomen is exposed, avoid petting the abdomen and pet her shoulders, head, and chin, petting only pet a few times. Monitor your cat’s body language, and at first sight of agitation or over-arousal, give her space and stop petting. Common signs of over-arousal are tail twitching and lashing, ears and whiskers back, skin twitching, hair standing on the body or tail, and a fixated look.

Contrary to popular belief, it is as important for kittens to be properly socialized and trained as it is for puppies.

Cats have a socialization period during the first weeks of life, falling between 2 and 7 weeks of age. During this period, they are learning what is safe and unsafe in their environment. Some certified cat behavior consultants, veterinary hospitals, and animal shelters even offer kitten socialization classes, often called kitten kindergarten.

Poor socialization can result in hiding from visitors, fearing other pets, adapting slowly to new environments, and feeling fearful and aggressive with handling at veterinary visits. These cats are more likely to become stressed and/or fearful and start urinating out of the box, which can result in the human-animal bond being damaged and owners relinquishing their cats.

However, well-socialized kittens who have received positive experiences around many different people, unfamiliar kittens, environments, and handling procedures are more likely to be outgoing, social, and have better coping skills, which will result in stronger human-animal bonds and less behavioral issues. These kittens are also more likely to receive annual veterinary care, since owners won’t be afraid to take their cats.

Myth: Cats Act Out of Spite

Unlike humans, cats do not act out of spite. Anthropomorphism is defined as the attribution of human characteristics to an animal or object. We commonly interpret animals’ feelings based on what we see as human body language and not cat body language.

It’s natural for us to do this because we want to relate to our cats and this can help to create bonds to animals but can also be harmful.

For example, if an owner thinks their cat(s) are going to the bathroom outside of the litter box out of spite, they are more likely to approach this issue negatively, which will escalate the issue and damage the bond with their cat.

If they address the actual causes (stress, fear, anxiety, medical issue), the owners will approach the issue empathetically and get the cat the help they need to resolve the issue.

How to Stop Your Cat From Overgrooming

Why Does My Cat Bite My Chin?

Why Do Cats Wag Their Tails?