Balinese are known for their intelligence, their friendly, inquisitive and playful nature, and their striking beauty. They are also often vocal and rather demanding. The breed arose as a result of a spontaneous genetic mutation in pure breed Siamese that caused the cats to develop a longer coat type.

Length: About a foot and a half long

Coat Color: Creamy white body with a variety of possible color points on the face, ears, legs, and tails

Characteristics of the Balinese

History of the Balinese

The Balinese does not have any links with Indonesia (their Siamese relatives are actually originally from Thailand), the name was created as the breeders thought the cat’s grace and elegance mirrored that of the dancers in the Temples of Bali.

The breed doesn’t have a long history. They were first introduced in the 1940s in America after long-haired Siamese kittens appeared in a litter. This spontaneous mutation caused the breeders to strive towards nurturing more of this variety, and the first Balinese breeding program was introduced in the 1950s.

While some people may simply view the Balinese as a long-haired variety of the Siamese Cat, this caused uproar amongst the purists and is one of the reasons they are no longer referred to as ‘Long-haired Siamese’ within breeding circles.

The Balinese is generally a very active, intelligent, affectionate and particularly social, medium-sized cat. They enjoy playing and are very curious, so it is important that you have lots of toys, scratching posts and enrichment ideas ready to keep them entertained and stimulated.

Their clever personalities mean that they can be trained more easily than many other breeds using positive reinforcement methods. While they are smart and very graceful, they are still sometimes referred to as clowns because of their goofy and fun antics.

They also crave company. They are not a cat that would suit being left alone for long periods at a time, and this could result in them becoming distressed and possibly exhibiting destructive behavior. With proper introductions, they are a breed that can live well alongside children, dogs, and other pets. They are often a popular choice as a family cat.

Like many cats, they do like to find high vantage points, so make sure that you keep surfaces clear and provide them with suitable “hiding” spots to allow them peace should they desire it. This could save your curtains from being ruined and your fragile items from being shattered.

If you enjoy a tranquil home, the Balinese may not be the cat for you; they are known for being particularly vocal and do like to chat with their owners, often demanding attention. They are generally accepted as being slightly quieter than a normal Siamese though.

The Balinese has a medium length, silky coat, and while they do shed seasonally, their coat does not require too much maintenance. They don’t have an undercoat and this means they are not so prone to getting tangles or mats. A good brush out of any loose, dead hair around once a week should be enough to keep their coat in good condition.

The breed comes in a variety of different colors. The main body of the coat is usually a creamy white, but they have distinctive color points that are found on the face, ears, full tail and legs. The most common of these are seal, chocolate, blue and lilac, and these are the four that are recognized as acceptable official breed standards. They can also come in red, lynx and tortoiseshell color points.

With their bright blue eyes, large ears, impressive plumed tail, and muscular physique, they are a strikingly beautiful and athletic creature. Their large ears may need a little more attention paid to cleaning than some cats though.

Some Balinese lovers claim that they are a hypoallergenic breed. There is no scientific basis behind this though. The fact that the Balinese does not have an undercoat means that they shed less and this could minimize a potential allergic reaction, but it is certainly no guarantee.

While they are generally a healthy breed, the Balinese can develop some of the same hereditary conditions as the Siamese. A good breeder will do rigorous health checks to minimize any problems developing.

Some of the conditions they can be prone to include:

Balinese, like any cat, should be fed a high-quality diet that is appropriately portion-controlled to avoid any weight-related health problems. They are known for being picky eaters so you may find they are more inclined to eat a wet diet than dry kibble. If they are on a wet diet, they may need a more regular dental hygiene regime to prevent them from developing gum disease.

The Most Intelligent Cat Breeds 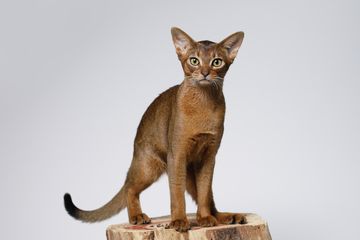 Where to Adopt or Buy a Balinese Cat

You may be able to find a pure-breed Balinese cat through a breeder in your area, but if you’d rather adopt from a rescue organization, check out:

Make sure that you do lots of research before deciding if a Balinese is the right cat for you. Seek out reputable breeders, talk to other Balinese owners and reach out to known rescue groups for further information.

If you’re are interested in similar breeds you could consider:

There are many different cat breeds for you to explore before you decide which one is right for your home.

How to Tell if Your Cat is a Purebred